Synthetic amorphous silica is one of the most used nanomaterials, and numerous toxicological studies have studied its effects. Most of these studies have used an acute exposure mode to investigate the effects immediately after exposure. However, this exposure modality does not allow the investigation of the persistence of the effects, which is a crucial aspect of silica toxicology, as exemplified by crystalline silica. In this paper, we extended the investigations by studying not only the responses immediately after exposure but also after a 72 h post-exposure recovery phase. We used a pyrolytic silica as the test nanomaterial, as this variant of synthetic amorphous silica has been shown to induce a more persistent inflammation in vivo than precipitated silica. To investigate macrophage responses to pyrolytic silica, we used a combination of proteomics and targeted experiments, which allowed us to show that most of the cellular functions that were altered immediately after exposure to pyrolytic silica at a subtoxic dose, such as energy metabolism and cell morphology, returned to normal at the end of the recovery period. However, some alterations, such as the inflammatory responses and some aldehyde detoxification proteins, were persistent. At the proteomic level, other alterations, such as proteins implicated in the endosomal/lysosomal pathway, were also persistent but resulted in normal function, thus suggesting cellular adaptation. 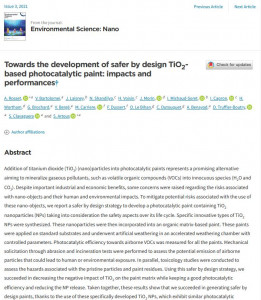 Addition of titanium dioxide (TiO2) (nano)particles into photocatalytic paints represents a promising alternative aiming to mineralize gaseous pollutants, such as volatile organic compounds (VOCs) into innocuous species (H2O and CO2). Despite important industrial and economic benefits, some concerns were raised regarding the risks associated with nano-objects and their human and environmental impacts. 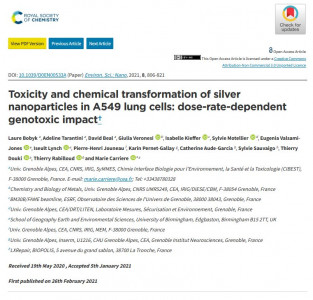 Silver nanoparticles (Ag-NPs) are widely used as biocides, leading to contamination of the environment and possible adverse effects on humans. Recent studies revealed that the cellular response to acute exposure to Ag-NPs differs from the response to chronic exposure, although we currently lack systematic studies comparing responses to different dosing regimens. 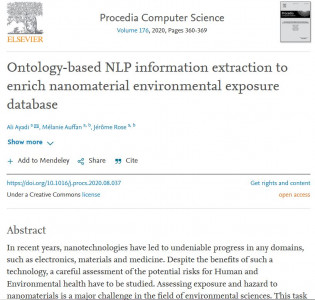 In recent years, nanotechnologies have led to undeniable progress in any domains, such as electronics, materials and medicine. Despite the benefits of such a technology, a careful assessment of the potential risks for Human and Environmental health have to be studied. Assessing exposure and hazard to nanomaterials is a major challenge in the field of environmental sciences.