LabEx SERENADE stands for Laboratory of Excellence for Safe(r) Ecodesign Research and Education applied to NAnomaterial DEvelopment and it is a Safe by Design project.

Laboratories of Excellence are part of the french program "Investissements d’avenir". In 2012, 71 LabEx have been selected through 2 calls for projects addressed to higher education and research institutions. It gives a 8 years financial support to scientific initiatives like the Labex SERENADE.

SERENADE is a partnership between french and foreign academic institutions and also industrial companies. It is carried by the OSU Pythéas and especially by the CEREGE [1] "Nanomaterials, waste and pollutants" group, which studies nanotechnologies implications and applications as part of its research areas.

Nanomaterials yet represent a first plan technological breakthrough and are expected to bring innovative applications by 2020. However, it is also commonly accepted that nanomaterials have to carry out several societal challenges like sustainability and acceptance before they could be transferred from the research labs to industry and finally to the end-consumer. Manufacturers are now expected to includes safety considerations since the design first steps and during the entire production of new-generation nanomaterials. 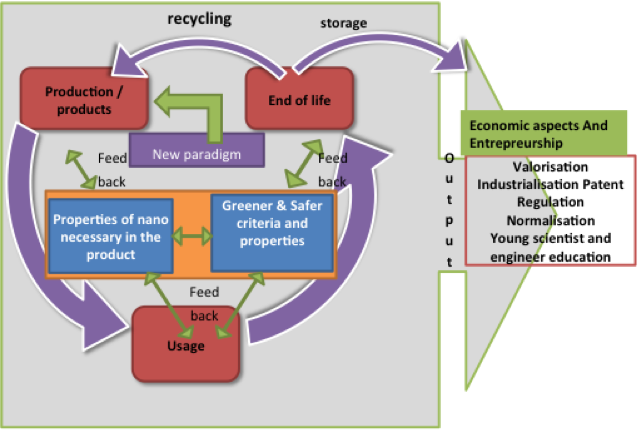 ⇒ Necessity of an eco-design approach

In many cases nanomaterials are modified to be incorporated in products. Confusion between nanoparticles and nanomaterials...

SERENADE does not focus only on the design phase, but addresses nanosafety during the entire life cycle of nanoproducts.

SERENADE aims to create a dynamic network of academic research laboratories and industries to design tomorrow’s nanomaterials that will be safer for both humans and the environment. The Labex lead both research and education programs to fulfill three main goals :